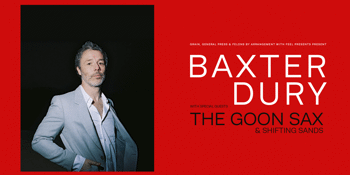 SHIFTING SANDS
Shifting Sands beginning was intentional. Of this there can be no doubt. Though the initial intention still remains a mystery the result from this beginning can only be described as a “happy accident”.

Geoff Corbett (SixFtHick) and Dylan McCormack (Gentle Ben & his Sensitive Side, The Polaroids) glued together words and music as a post-work debrief to take the edge off dealing with life’s little realities of someone else’s problems in a Drug & Alcohol unit in a faraway hospital.
It was never meant to mean anything. But it did.

At the core Corbett and McCormack along with a revolving door of Brisbane’s finest managed to spit out something not heard and not tried on the stage-boards for quite some time, maybe forever ( in northern climes at least). It was tagged down-beat, depresso-core. The Sands were the quietest heaviest band around and still are.